Based on a wide-ranging quantitative study from “Generation Nation” and other research, here are a few Millennial stereotypes that we’re okay perpetuating, because, well, they’re true.

1. Millennials are full of self-esteem and optimism

You better believe they are. Members of the generation that grew up with participation trophies think that they’re pretty great as young adults.

Millennials, much more than other generation, feel that their lives are “full of purpose,” which reflects their perceived self-worth. Fully 67% of Millennials believe this to be true, compared to only 53% of Gen Z, 55% of Xers, and 58% of Boomers.

Additionally, a higher percentage of Millennials than any other cohorts believe that their life will get better as they age. This optimistic streak is one of Millennials’ most enduring and unifying qualities. Although they’re optimistic about the direction of their lives, they also admit that there will be more challenges as they get older. So don’t mistake their optimism for naiveté. They are ready for those challenges (or at least expect bumps in the road) as part of growing up but have confidence in themselves to overcome them.

According to a 2014 Pew Research survey, Millennials are overwhelmingly optimistic about the future: nearly half say the country’s greatest years are ahead. No other generation comes close to expressing this level confidence in the U.S. It should come as no surprise then, that 70 of Millennials, according to “Generation Nation” are looking forward to “what lies ahead.”

Here’s a shocker: Can you guess which generation says its members are “really good looking”? Nearly half of Millennials believe this, compared to only 33% of Gen Z, 30%of Xers, and 21% of Boomers. Talk about chutzpah (and, talk about colorful data, thanks to 747 Insights’ “Generation Nation”). 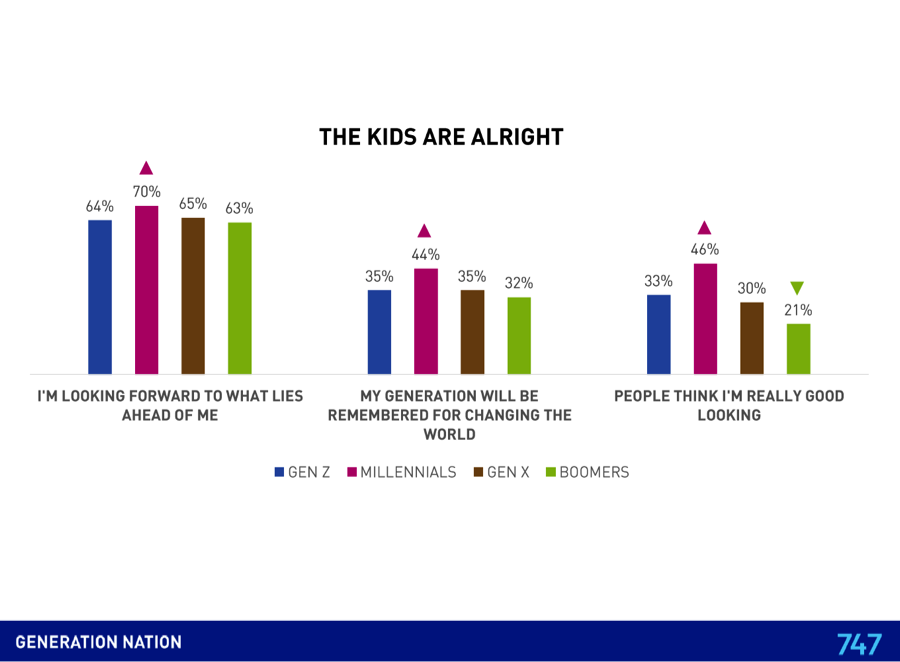 2. Millennials are activists who think they can change the world

Although members of Gen Z are the newest entrants into the political arena, particularly around the issue of gun violence, Millennials have been wearing their values on their sleeve since protesting hanging chads and an illegal war nearly two decades ago. Nearly 80% of Millennials “want to do things for others and make the world a better place.”

While Millennials are often portrayed as stereotypically liberal, in reality they are more middle-of-the-road than you might expect. Nearly half (45%)  of Millennials describe themselves as politically “moderate,” while roughly the same percentage describe themselves as either “very liberal” or “very conservative.” Those who are moderate, however, did vote Democratic in the last presidential election. Even so, the activist wing of Democrats is led by Millennials. According to a 2016 piece from The Atlantic, “In Iowa, New Hampshire, and Nevada, more than 80 percent of voters under 30 years old voted for Bernie Sanders, a democratic socialist so outside the mainstream of his party that he’s not even a member.” 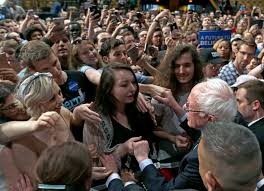 More Millennials attended political rallies last year than any other cohort, according to “Generation Nation.” And, when compared to all other voting-age generations, Millennials are much more liberal when it comes to policies ranging from immigration and marijuana reform to abortion and LGBT rights.

Because of their optimism and activism, Millennials feel pretty fantastic about, well, being Millennials. (They are really good-looking, right?) They see their generation as more than a group of people who happen to be the same age. They believe they’re part of a cultural sea change. More than other cohorts, Millennials contend they will be remembered for changing the world. And, more Millennials believe that the “next generation’s lives will be better” than others. This belief reflects not just their general level of optimism, but a profound belief that as their generation takes control of more levers of power, positive change will come.

3. Millennials love to shop, even if they are in debt

As hopeful as they are that the world will become a better place, Millennials are also crossing their fingers that their bank accounts will grow quicker than their debt. A look at future spending reveals that it’s Millennials who expect to spend significantly more than other generations in the coming year (and we hear a collective “phew!” from marketers). For now, this isn’t an anomaly.

Millennials enjoy their material possessions, but are on the lookout for ways to reduce or share costs when possible. It’s not surprising then, that Millennials participate in the gig economy. According to the Millennial Economy Report, almost half (44 percent) of Millennials have a side hustle to bring in some extra income. Most Millennials want their purchases to benefit more than corporate bottom lines. This is the first generation to truly put a priority on altruism as it relates to commerce. (Check out my previous article that expands upon this idea.) Millennials are looking for careers that give them freedom, flexibility, and fulfillment, and of course, some extra cash. 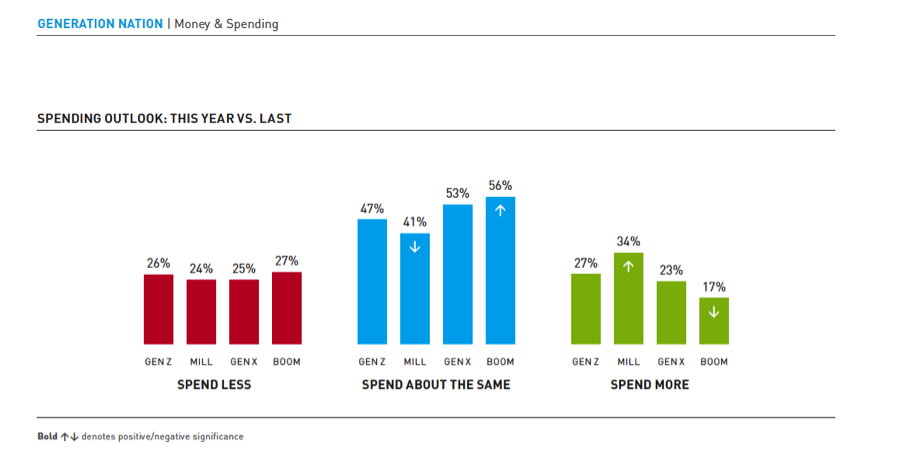 None of this, however, means Millennials have some secret stash: The average Millennial has $30,000 in student loans and a median net worth of a mere $10,400, according to The College Investor. Further, according to Pew, more than one million Millennials are becoming new moms each year, which means fewer triple Venti soy no-foam lattes and more Enfamil Gentease Infant Formula Powder tubs. So it’s no surprise that half of Millennials are worried about the amount of debt they owe. This worry not only about making ends meet today and paying back loans from yesterday exacerbates their worry about saving for retirement tomorrow. Six in 10 Millennials believe they won’t have enough money for retirement. In fact, only 24% are currently saving for what’s supposed to be their golden years.

Millennials love to shop. The roughly 60% who are worried about their debt or future savings also consider themselves prudent with their money. With economic vagaries playing an outsized role in so many Millennials’ financial lives, they are trying to thread the needle: live a comfortable lifestyle today while worrying and (some) planning for tomorrow.

Millennials just love their social media. We all know this. Just peak around your office, and I bet you’ll catch a Millennial scrolling or swiping. This is probably the most accurate behavioral stereotype about this generation: their enthusiasm for tech as a tool for social interaction shows no bounds. Members of this generation founded all the major social-media platforms and are their biggest users. (Check out this previous article I wrote that highlights the significant differences between the social-media habits of Millennials and Gen Z.)

According to “Generation Nation,” roughly two-thirds of Millennials are frequently active on social media and say that it’s is an important part of their life. About half of Zers, and Xers and only a third of Boomers feel the same way. Nearly 70% of Millennials say they post on social media “very often” compared to 56% of Gen Z, 54% of Gen X, and 36% of Boomers. 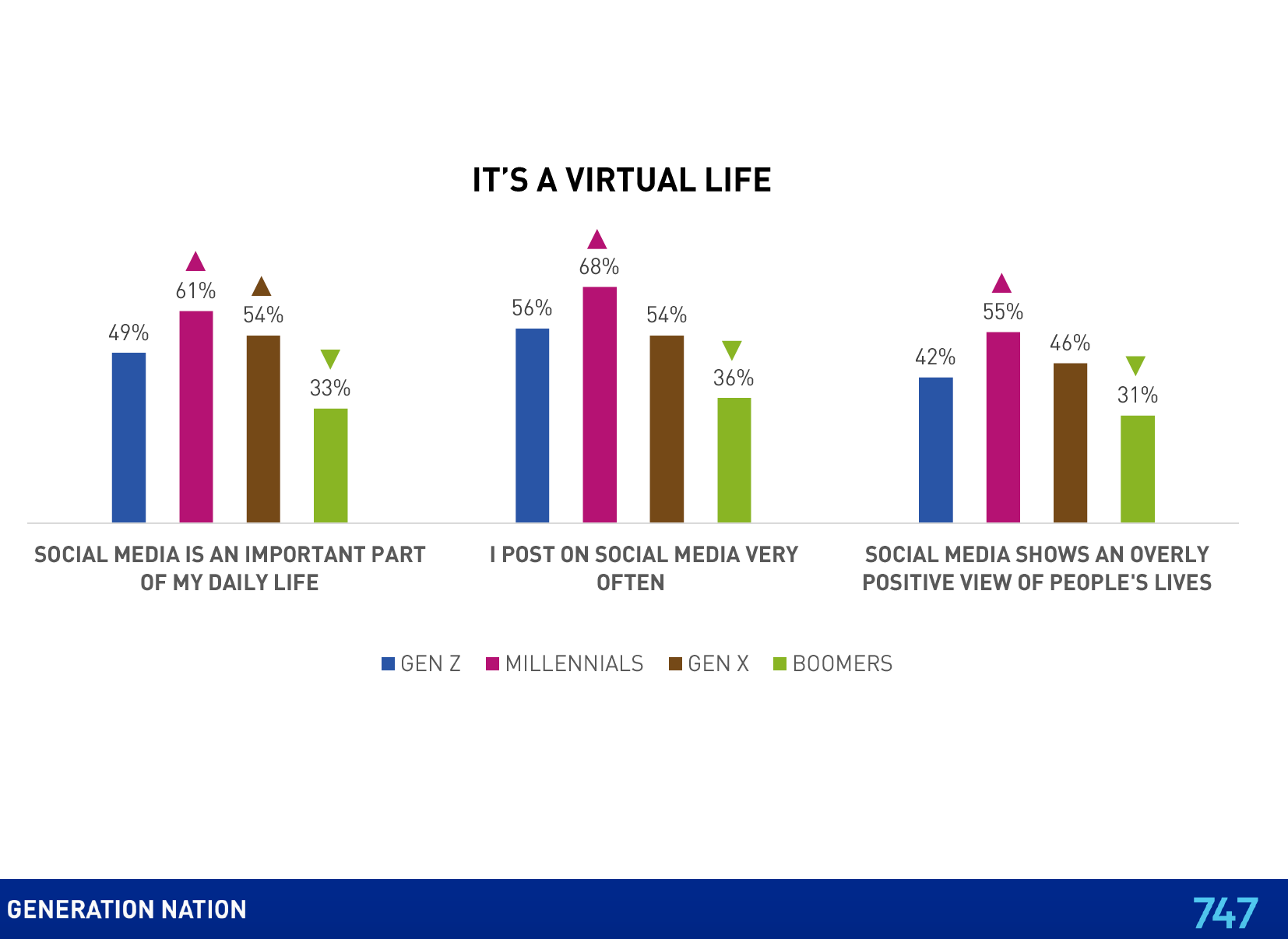 About half (51%) of Millennials admit to posting updates they consider “new or exciting,” compared to only 32% of Gen Z. About half of Millennials check out user reviews (more than any other cohort), and 60& get most of their news from social media. Only 20% of Boomers, 41% of Xers, and 54% of Zers rely on social media for their news. 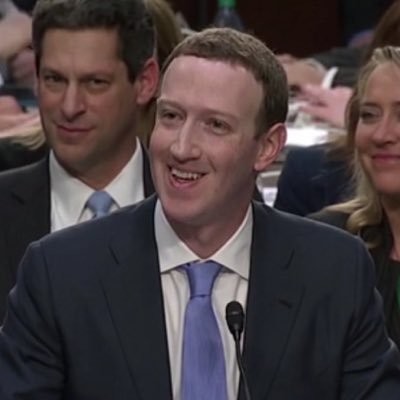 You’d think Millennials’ obsession with social media might cloud their judgment when it comes to the pitfalls of plastering your life for all to see online. But the opposite is true: Millennials — more than any other generation — understand there’s a dark side to social media. More Millennials (55%) acknowledge that social media shows an “overly positive view of people’s lives.” They also contend, more than any other generation, that social media takes up too much time (even if they’re not reducing their own screen time). Finally, they’re less concerned than are other cohorts about their information being publicly available. (Keep smiling, Zuckerberg.)

5. They want to be healthy

In order to keep up those good looks, Millennials are more health-focused than other generations. (Hey Gen X, time to go hop on the treadmill!) If you do end up going to the gym, you’ll join the 40% of Millennials who do the same (only 26% of Xers and 28% of Boomers are gym-goers.) Nearly two-thirds of Millennials (63%) consider themselves to be healthy, compared to just 50% of Gen Z, 54% of Gen X, and 61% of Boomers. A higher percentage of Millennials also regularly practice yoga and meditate. 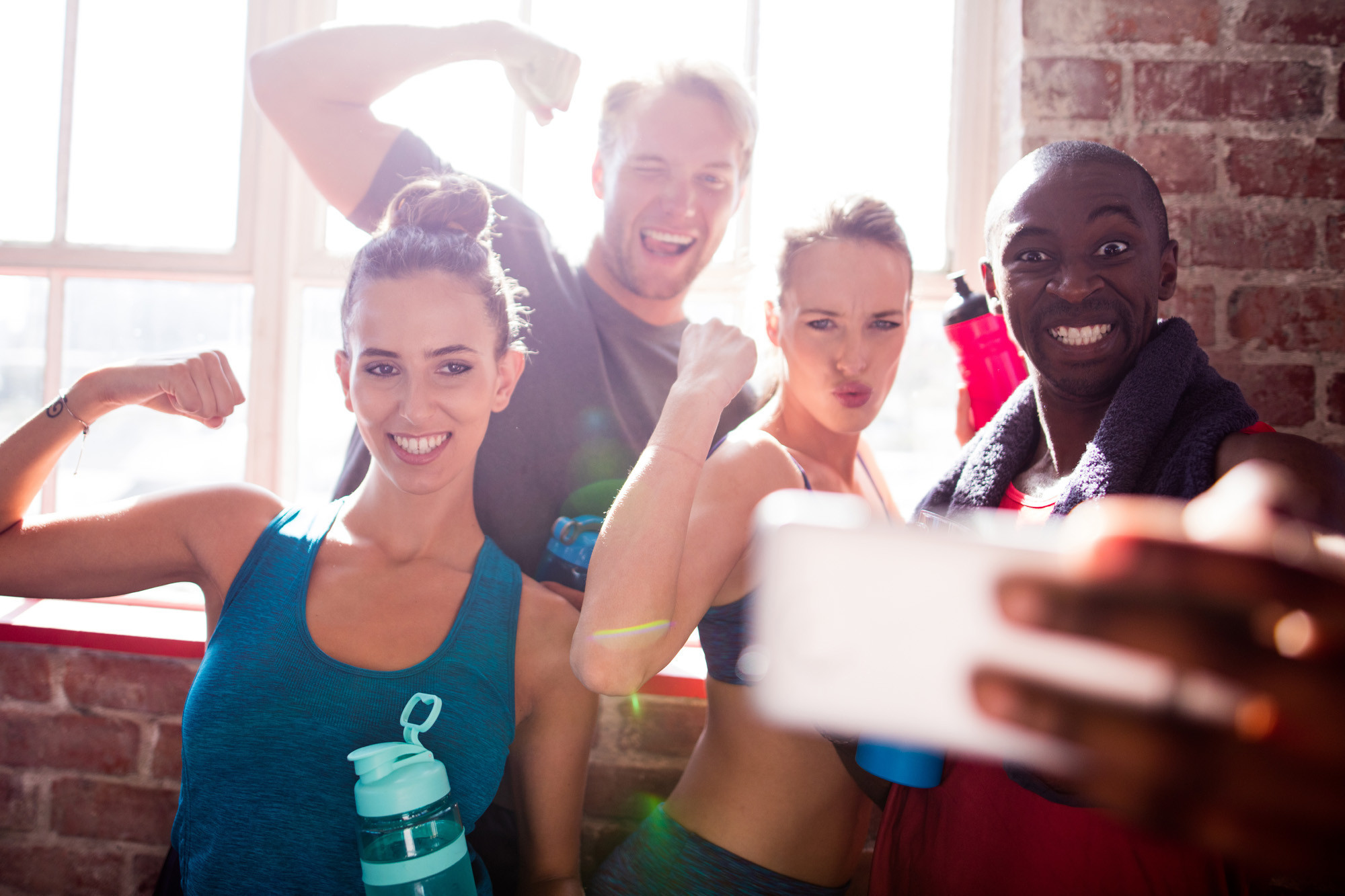 In terms of sustenance, consumers across all generations say they pay attention to their eating and drinking habits, and about half of those older than Gen Z pay attention to nutrition labels. But while most consumers say they’re health-conscious, their behavior often falls short of their aspirations.

Millennials are more interested in the newest ways to hack their health. They are as wary of gluten as they are smitten with probiotics. And, more have attempted to diet, either on their own or with the assistance of a branded program.